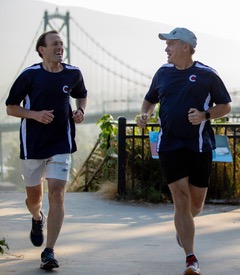 “Mama Mia - here we go again.”  Last week’s ouster of Erin O’Toole as our Leader brings to five the number of leaders we’ve had since 2015 - unless I lost count.  Whatever you think of the events of this week, they certainly set us up for the most exciting ever Annual General Meeting of our Electoral District Association, at 2pm Saturday, March 5th.  More on that below.

If you’re like me, you thought that Erin was destined to lead our Party at least until the leadership review scheduled for 2023.  But a letter circulated last Monday afternoon signed by 35 Conservative MP’s, calling for an immediate Caucus review.  By Thursday morning, Erin was out, and last night MP Candice Bergen became Interim Leader.

No one likes instability.  Each time an organization switches leaders, there is confusion with the new adjustments.  But the story’s not all bad.  Give our Party credit for transparency and accountability. Of all the parties in Parliament, theirs is the only one that adopted the Reform Act initiated by Conservative MP Michael Chong, which provides Caucus members a specific path for challenging and replacing a leader.  Adopting the Act was risky business but doing so is consistent with a Party that prides its commitment to free thought and free speech.

Lessons learned for all leaders?  I see at least two.

Firstly, every organization - company, non-profit, faith group, or political party - needs a clear sense of values.  Those lacking a clear, values-driven identity are doomed to focus exaggerated attention on the leader and his or her peccadilloes.  As Jim Collins demonstrates in his influential books on business organization, the companies distinguished by clear values, with leaders who avoid the limelight, are the ones “built to last”.  The Conservatives need a galvanizing values statement that promotes the strength of the individual and the right of equal opportunity for all to achieve their objectives in life. Consistent with Tory traditions, the statement should acknowledge responsibility to give back to our community more than we receive. It should articulate the importance of individual excellence and community responsibility, together to foster a sustainable society.

Secondly, no organization should put all its eggs in the basket of one person’s public profile.  The tendency in Canada is to load disproportionate importance on the antics or looks of one leader, instead of diffusing the role among a leadership team.  Cabinets have diminished in importance with the rise of the Prime Minister’s Office and social media feeds off people’s obsession with personality cults.  Great organizations are led by groups of people, even if circumstances dictate that one of those be “Primus inter pares” - first among equals.  Pushing several leaders into the spotlight facilitates the best gifts from a wider pool and mitigates the risk if one person fumbles.

Finally, those who care about good leadership in Canadian society - in and out of politics - are driven by current events to acknowledge once again, “Uneasy lies the head that wears the crown.”  Imagine the toll this debacle has imposed on Erin O’Toole, his wife Rebecca, and their two children, Molly and Jack. Leadership is fraught with uncertainty and strife.  Even when we disagree with our leaders, we are all human; let’s remember that.

In our riding, we have a lot to discuss if we’re serious about making our country better.  To that end, I hope you’ll attend the upcoming virtual AGM for our Riding Association, at 2pm PT, on Saturday, March 5th.  Among other things, we’ll elect a new group of energetic Conservatives to serve on our Board.  See you there!

John Weston literally ran with Erin O’Toole in the last election, as the Conservative candidate for West Vancouver - Sunshine Coast - Sea to Sky Country.  He did not win, though he did serve the riding as MP from 2008 through 2015.  He now works as an international lawyer and government relations specialist at Pan Pacific Law Corporation.