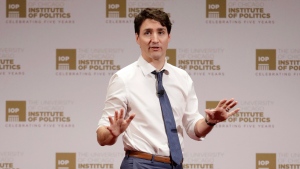 It was a week the Liberals’ fixation with political correctness became politically incorrect.

Amid a clear meltdown in Liberal government poll support, new moves on gender and tolerance issues were met by a head-shaking, eye-rolling, derision-snorting reaction from a public fed up with the excess of it all.

The government’s proud plan to road-trip consultations on racism, with an eye to infusing every policy with anti-discrimination measures, was quickly put on ice. Quebec MPs in the Liberal caucus sounded the alarm about the perils of cross-Canada hearings whipping up Islamophobia or worse.

And that bizarre Service Canada decree to ban gender specific terms like ‘father’ or ‘mother’, ‘Mr.’ or ‘Mrs.’ from all telephone communications had the government doing backflips to insist the policy had been refined.

The message seems to be finally getting through: Justin Trudeau has become so identified with kumbaya peoplekind priorities that he’s lost the appearance of leading a serious government.

After all, the budget bellyflopped into a mosh pit of multi-billion-dollar gender measures that will do nothing to help a working mother if she can’t find or afford child care.

That followed Trudeau’s heavily-costumed India tour with a cast of Indo-Canadian MPs in tow (minus his white foreign affairs minister) which was visual confirmation of a prime minister who valued symbols over deliverables.

And this all plays out to the ongoing soundtrack of appointments guided exclusively by gender, ethnic or indigenous criteria; where anti-abortion positions are deemed anti-Liberal; and where the world’s most dangerous peacekeeping assignment is sold as a gender-boosting exercise.

What’s worse, the push for inclusiveness is spreading beyond Liberal ideology. Nunavut’s premier is now vowing to force all government workers to speak fluent Inuktut languages, which would throw two-thirds of the territory’s workforce out of their jobs.

The route to lasting political correctness requires the tolerance and patience to nudge societal change forward.

Justin Trudeau’s rush to impose it unilaterally, to the alienation of so many Canadians, will only generate a time-rewinding backlash.